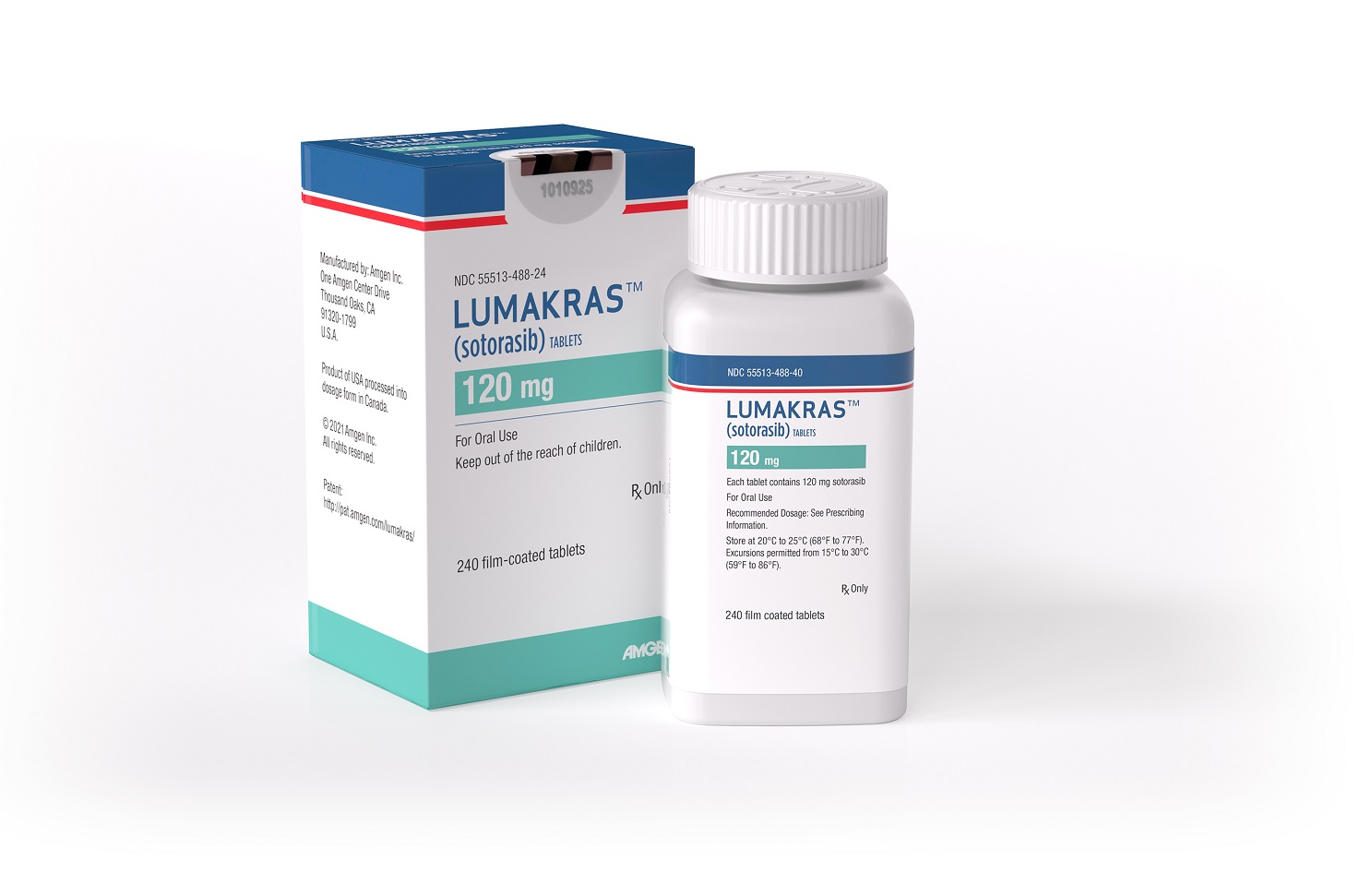 A cancer target long thought to be “undruggable” finally has an FDA-approved therapy: a closely watched Amgen drug that treats non-small cell lung cancer (NSCLC) in patients whose disease is driven by that particular genetic mutation.

The FDA decision Friday makes the Amgen drug, sotorasib, the first one approved to target the KRAS mutation. Mutations to KRAS account for 25% of mutations in NSCLC. The sotorarsib approval specifically covers a subset of those mutations called KRAS G12C, which the FDA says accounts for about 13% of mutations in NCSLC.

The FDA approved the Amgen drug as a second treatment option for patients who previously received at least one systemic therapy. The KRAS G12C mutation will be detected by Guardant Health companion diagnostic that was also approved on Friday. Amgen will market its new cancer drug under the trade name “Lumakras.”

“KRAS mutations have long been considered resistant to drug therapy, representing a true unmet need for patients with certain types of cancer,” Richard Pazdur, director of the FDA’s Oncology Center of Excellence and acting director of the Office of Oncologic Diseases in the FDA’s Center for Drug Evaluation and Research, said in a prepared statement. “Today’s approval represents a significant step towards a future where more patients will have a personalized treatment approach.”

KRAS is part of the RAS family of genes, which encode proteins that play a role in cell signaling. These proteins normally acting like an on/off switch to regulate cell growth. But when KRAS is mutated, that switch can get stuck in the “on” position, leading to unregulated cell growth.

KRAS proteins have been hard to drug because their structure lacks deep pockets to which small molecules can bind. Lumakras is a small molecule designed to bind to KRAS G12C, locking the protein in an inactive state that prevents it from sending on the signals that drive uncontrolled cell growth. The targeted approach of the drug doesn’t affect KRAS that isn’t mutated.

Accelerated approval of Lumakras was based on the results of a Phase 2 study that tested the therapy in 124 patients whose KRAS G12C-driven NSCLC had progressed after receiving treatment with an immunotherapy called a checkpoint inhibitor, and/or chemotherapy.

The main goal of the open-label study was to measure the objective response rate, which is the proportion of patients whose tumors were destroyed or reduced in size, as well as the duration of the response. The FDA said that the objective response rate was 36%. Of those who responded to treatment, 58% had a response that lasted six months or longer. Overall survival data, the length of time patients are still alive after the start of treatment, are scheduled to be presented at the annual meeting of the American Society of Clinical Oncology next month.

The most common side effects reported in the clinical trial included diarrhea, muscle pain, nausea, fatigue, liver damage, and cough. The FDA said that treatment with Lumakras should be withheld if patients develop symptoms of interstitial lung disease, a condition that causes scarring of the organ. If the disease is confirmed, the use of the drug should stop. If liver damage develops, the FDA said that the drug should be withheld, the dose reduced, or its use can be discontinued permanently.

There are other companies are still in the chase with KRAS-targeting drugs. Mirati Therapeutics is in late-stage testing with a small molecule that targets KRAS G12C. Merck is developing small molecules to address KRAS mutations under an alliance begun last year with Taiho Pharmaceutical and Astex Pharmaceuticals.

Amgen aims to broaden use of Lumakras to other cancers. The company is also conducting a Phase 2 test of its drug in colorectal cancer. The company said that clinical trial is fully enrolled and preliminary results are expected later this year. A global Phase 3 study is underway comparing the drug to the chemotherapy docetaxel in NSCLC patients with the KRAS G12C mutation.

Approval of Lumakras, which will be given as a 960 mg dose, came more than two months early. The target date for a decision was August 16. The accelerated approval, based on a thinner body of evidence than is typically evaluated in a standard drug review, requires Amgen to conduct additional clinical research to test whether a lower dose will have a similar effect.

6 Surprising Things That Can Happen When You Have An Orgasm

Orgasm. The Big O. Climax. Coming. Getting off. Ejaculation. We may have different terms for it, but we can agree on one thing: Orgasms can be seriously satisfying. For many people, the orgasm process is pleasurable but fairly predictable: There’s the buildup, those toe-curling contractions, followed by a feeling of well-being and relaxation. But occasionally, […]

At the start of 2021, serial biotech entrepreneur Gary Glick revealed a mega-round of financing for his new precision oncology startup. Now he’s back at it again, bringing along some familiar investors who have joined forces to raise even more money—$218 million—for yet another startup he founded, Odyssey Therapeutics. That biotech is setting out with […]

Patients admitted to rural hospitals that had merged or been acquired had better mortality outcomes than those admitted to facilities that remained independent, according to a new study. More specifically, the risk of death for patients admitted for heart attacks decreased more at merged hospitals than at their non-merged counterparts in the one year after […]