Is there anything in life that beats looking into your baby’s eyes? No, but seriously. Whether you’re singing to your baby or feeding her, locking eyes with your precious little one is the most rewarding part of being a mom. And there’s a real reason why. In fact, science actually gives you a good reason to do more of it: A new study shows that gazing into your baby’s eyes helps you communicate with each other.

What the study looked at

People are social by nature, and scientists have already established that our brains are built to communicate with each other. Previous research has shown that when babies and caregivers look into each other’s eyes, they bond. So the study authors wanted to take a deeper dive into this phenomenon and find out the nitty-gritty of what’s going on in your brain and your baby’s when you look at each other.

To do so, they set up two small studies using EEG (electroencephalography, which records the brain’s electrical activity) on both adults and babies. In the first, 17 infants watched a video of an adult singing nursery rhymes. The adults were either looking directly face-forward at the baby; indirectly (head averted to 20 degrees and not looking at the baby); or directly-obliquely (head turned to the side but eyes looking into the infant’s, to ensure that the babies were responding to the eyes and not to the head positioning). In the second experiment, a group of 19 different infants watched adults perform nursery rhymes live with the same direct and indirect head/eye positions. They then compared the babies’ and the adults brain activity using the EEG measurements. Their research was published in the Proceedings of the National Academy of Sciences (PNAS). 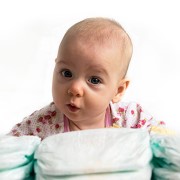 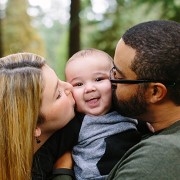 All That Snuggling With Baby Is Actually Changing Her DNA, New Study Finds 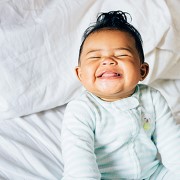 All That Snuggling With Baby Is Actually Changing Her DNA, New Study Finds

The researchers concluded that direct eye contact between babies and caregivers “strengthens bidirectional adult–infant neural connectivity during communication.” In other words, that eye contact is a crucial part of how you two communicate!

What this means for you

The best way to bond with your baby is to spend time together reading, singing and cuddling. Eat up each and every opportunity to look your little one in the eye. And since the study shows that babies get more out of in-person interactions, it gives you even more reason to skip the screen time and instead spend quality one-on-one time with your infant.

Why Do Newborn Babies Smell So Good? Science May Finally Have an Answer

Last week, the American College of Obstetricians and Gynecologists (ACOG) and the Society for Maternal-Fetal Medicine (SMFM) released new guidance stating that they “strongly recommend” the COVID-19 vaccine during pregnancy. The two prominent physician groups emphasized the safety of the vaccines and noted that COVID-19 puts pregnant people at increased risk of severe complications. The vaccines […]

As the year comes to a close, you may be settling down and finally getting started on putting together baby’s nursery. From what furniture to get and how to arrange it to what design elements to choose, It’s easy to get overwhelmed while tackling the nursery. Our advice? Take it one step at a time […]

5 Things You Should Definitely Have on Your Baby Registry

When you’re expecting, the list of everything you need before the big arrival is pretty lengthy: there’s the car seat, swaddle blankets, diaper bag, oh, and an enormous supply of diapers to pack it with, etc., etc., etc. But been-there-done-that parents will tell you that there are a few life-changing items that new moms and […]