Welsh victims of the contaminated blood scandal are being used as “political footballs”, a help group has said.

Charity Haemophilia Wales said it was concerned victims were dying without getting the financial support they deserved due to differences in how much money is paid out across the UK.

Payments to victims in England were increased this year with the inquiry judge calling for parity elsewhere.

Wales’s health minister has blamed the hold-up on the UK election.

In July, Vaughan Gething said he wanted the issue resolved quickly but no changes have yet been made to the payments in Wales, which are the responsibility of the Welsh Government

According to Haemophilia Wales, that leaves Welsh victims about £10,000 a year worse off compared with their English counterparts.

The Welsh Government said it was working with the other UK nations towards financial parity and support.

Up to 30,000 people were infected with contaminated blood and blood products in the 1970s and 80s.

More than six months after first speaking to BBC Wales about the issue, Kirk Ellis, 38, from Caerphilly, said he was frustrated he is still thousands of pounds worse off.

“Personally I don’t’ think they’re bothered about us,” he said.

“To me I feel like they’ve just shrugged us off. I just feel like we’re discriminated against.”

Mr Ellis receives £18,500 a year after he contracted hepatitis C when he was given infected blood as a child.

Engaged to be married and with a three-year-old son, Mr Ellis stressed the importance of including widows in the Welsh scheme – as is the case in Scotland.

“I worry that I might not be here is six months or a year’s time. I’m trying to save money so that I know that there’s some sort of safety net there for them but, on the payments we’re getting, it’s just not high enough.

“I just feel I can’t give my partner and my son any security. That’s what really hurts is I feel like I’m letting them down.” 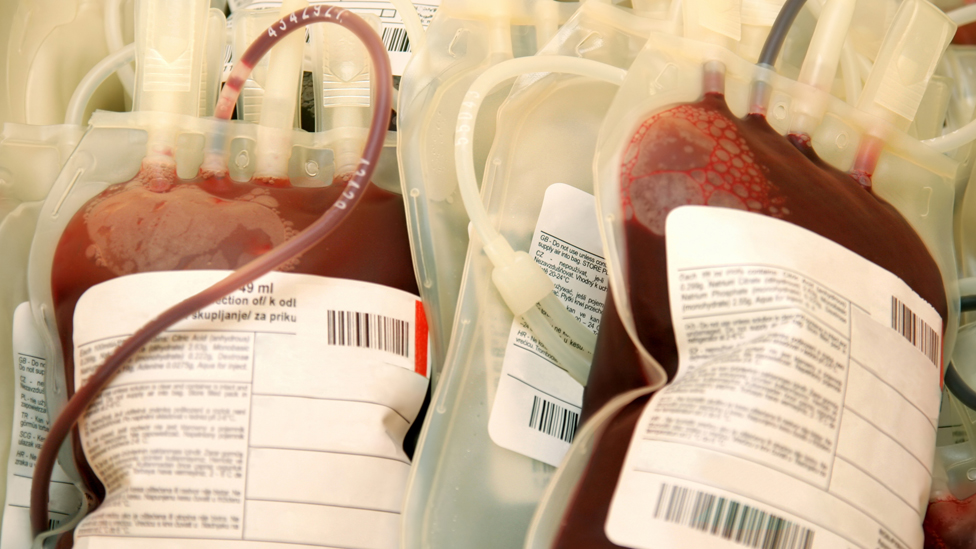 More about the blood scandal in Wales

A public inquiry into the scandal is currently looking at why thousands of people with haemophilia were infected with hepatitis C or HIV in the 1970s and 1980s.

At least 300 people in Wales are known to have been infected, but this does not include others who have died or may not have known they were infected.

Even though Haemophilia Wales chairman Lynne Kelly says “ultimately the fault is with the UK government”, she believes the Welsh Government should do more to help victims and their families.

“So that is why we’re looking to Welsh Government, but unfortunately we’re just being used as a political football, we’re being pushed from pillar to post with this.

“We know there’s only been one meeting between Welsh Government ministers, the devolved administrations and the Cabinet Office, but nothing has happened. There’s been no progress and people are dying.”

Haemophilia Wales is also campaigning to secure payments for widows who do not currently receive any payments in England in Wales.

“There are only 35 widows in Wales, and Justice Langstaff, who chaired the public inquiry, has asked that payments be levelled up across the UK for the infected and the affected people.”

What is the Welsh Government response?

The Welsh Government said the announcement made on 30 April by the then prime minister, was “particularly unhelpful” and referred only to payments made to those beneficiaries of the English Infected Blood Scheme (EIBSS).

Deputy Health Minister Julie Morgan met UK health ministers on 10 July and all four nations have agreed to work towards greater parity in support, as an interim step, before any recommendations in the Infected Blood Inquiry’s final report.

Health Minister Vaughan Gething said: “Discussions have been ongoing both at ministerial and official level to seek the additional funding necessary to match the English payments announced earlier this year.

“Unfortunately, due to the UK elections, the work on financial parity has been halted and will be picked up again now a new government at Westminster has been formed and the minister responsible for this policy area has been identified.

“Before any decision is made on the way forward in relation to any future scheme, those affected will be kept informed as plans are developed.

“I remain committed to ensuring that those infected and/or affected get their voice heard at the Infected Blood Inquiry and that they receive the answers they deserve.”

Using social media isn’t directly harming teenagers – but it can reduce the time they spend on healthy activities, such as sleeping and exercising, a study suggests. Parents should ban phones from bedrooms after 22:00 and encourage more physical activity, the UK researchers said. Girls were particularly vulnerable to cyber-bullying on social media, which could […]

New Mexico said it plans to award a $5 million grand prize to one resident who has been vaccinated against COVID-19. It would be the largest cash incentive offered in the country so far in hopes of beating back the ongoing coronavirus pandemic. Gov. Michelle Lujan Grisham (D) said vaccinated New Mexicans can now enter […]

“It really had a lot to do with what we thought people would be able to tolerate,” said CDC Director Rochelle Walensky. admin See author's posts