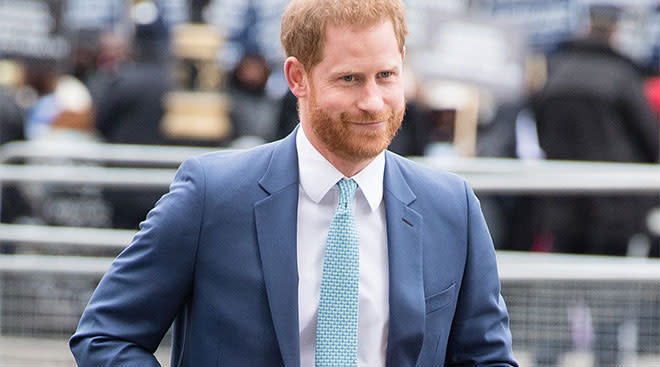 The Duke of Sussex appeared on The Late Late Show with James Corden on Thursday, February 25, discussing Archie and what the Queen gave him for Christmas, having tea time on a double decker bus and even FaceTiming with his wife Meghan Markle.

“My son is now just over a year and a half. He is hysterical. He’s got the most amazing personality. He’s already putting three, four words together. He’s already singing songs,” Harry said during the show. But crocodile’s not the only word he can say! These days, Archie’s also been saying a lot of, “Waffle.”

Queen Elizabeth II, had given Archie a waffle maker for Christmas, Harry explained. “She sent us a waffle maker for Archie, so [for] breakfast now Meg makes up a beautiful organic mix in the waffle maker. Flip it, out it comes. He loves it,” he said. “Archie wakes up in the morning and just goes, ‘Waffle?’”

Along with the adorable details on Archie, we also learned what Meghan’s nickname for Harry is during a FaceTime call between the two. “Haz, how’s your tour of L.A. going?” she asked during the call.

Meghan’s not the only one Harry’s been video chatting with, however. He shared he also frequently does zoom calls with both the Queen and Prince Philip. “They’ve seen Archie running around,” he shared, adding that while he and Meghan have stepped down from their royal duties, they are still very much a part of the royal family.

“It was never walking away—it was stepping back rather than stepping down. It was a difficult environment, as I think a lot of people saw. We all know what the British press can be like, and it was destroying my mental health,” he told Corden. “I did what any husband and any father would do. [I said,] ‘I need to get my family out of here.’ We never walked away. And as far as I’m concerned, whatever decisions I made on that side—I will never walk away. I’ll always be contributing. My life is about public service: wherever I’m in the world, it’s going to be the same thing.”

Nausea, vomiting, dry heaving—oh the joys of the first trimester. Morning sickness (okay, all-day sickness) may be par for the pregnancy course, but that doesn’t mean you should have to grin and bear it. Hoping to curb an episode of retching? Feel that telltale queasiness rising? Pop a Pink Stork morning sickness lozenge fast. Formulated […]

Anderson Cooper is a dad to two! The CNN anchor announced on February 10 that he had welcomed his second son, Sebastian Luke Maisani-Cooper, via surrogate. “I wanted to start out with some good news, which also happens to be very personal news,” Cooper said. He continued to reminisce about a similar announcement he made […]

There’s good news for any parent seeking out developmental toys for baby: Starting August 22, Target is launching a new line of stage-based play essentials from the brand Lovevery. One of the items available through Target — and even Target.com — is the brand’s popular play gym. Here, What to Expect Executive Editor Kathleen Felton […]