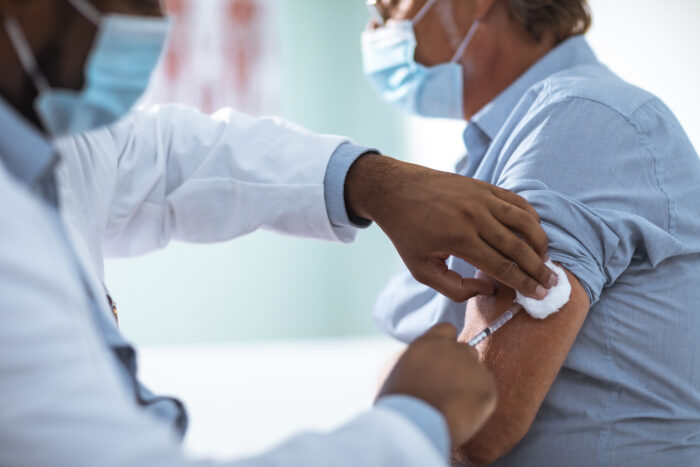 After some early hiccups, the U.S. was able to ramp up its rollout of Covid-19 vaccines, peaking at more than 3 million a day. However, that pace has since slowed—the average rate has dipped below two million for the first time since March—and in doing so has further revealed the underlying equity gaps in vaccine coverage. In addition to asking how many people are getting vaccinated, it’s important to ask who is (and isn’t) getting vaccinated. The answer to this question is unfortunately all too predictable. Recent data reveals that across the country, the proportion of white Americans receiving vaccines is greater than that of black and Hispanic Americans, as well greater compared to their proportion of overall cases, deaths, and portion of the population.

On the tech side, it would be a severe understatement to describe the tools developed by the federal government to allocate vaccine supply and for individuals to make vaccination appointments as not user-friendly. As the rollout started, many states have abandoned the Vaccine Administration Management System (VAMS) altogether; some resorted to using tools like Eventbrite as an alternative.

The technological failures and the systematic inequities of the roll-out aren’t separate stories. Developers of public health technologies have long understood that in order to achieve equitable access to those technologies, it is necessary to begin addressing these priorities in the early design stages of those technologies. To do so, they often seek input from prospective end-users, something which did not happen as these technologies were developed.

Design products appropriate for the populations and environments they will be used
Pharmaceutical product developers often begin the process by defining a target product profile (TPP). Developers imagine the use cases for the product they are designing. Who will use it? Where and how will it be used? How do practical factors, like logistics, budget, or storage dynamics impact the ideal attributes of a product? Through this, developers define parameters and minimum requirements for product design. A similar process should have been adopted for developing technologies like VAMS.

When viewing the design of VAMS through a TPP lens, some of its flaws are downright embarrassing. Understandably, VAMS is web-based. But that immediately creates barriers to access among groups that should have been identified as high-priority users. Only 59% of seniors have broadband connections at home; the rate is similar for those with incomes below $30K. Black or Latino Americans are substantially less likely to have broadband access than White Americans.

VAMS is not compatible with Internet Explorer – another unnecessary barrier to access. Further, VAMS is not optimized for mobile view, so the “Next” button may not be visible when accessed from a smartphone. Compatibility with all popular web browsers and optimization for use on mobile devices should have been no-brainer, non-negotiable attributes of a health system intended for wide use, including seniors and those living in poverty. These blind spots indicate deep naivete or ignorance of the journey from deciding one wants a vaccine to actually receiving one.

Phone-based systems were developed as an alternative to VAMS but were not adequately set up or staffed to handle the volume of calls they subsequently received, which itself is something of a second-order effect of the design flaws of VAMS. Other measures that avoid the need for use of systems, such as increased deployment of mobile vaccination clinics and vaccine-related promotions through partnerships with private entities have been welcome and may help to close some of the vaccine equity gaps established in the early stages of vaccine availability, but ideally would have been scaled earlier.

Effective Health Technologies Improve Human Systems
Health technologies connect human and digital systems. A health technology may be effective because it standardizes procedures, increases productivity or accuracy, or influences patient or care provider behavior. If a technology doesn’t address an element of underlying human behavior as it relates to improving the functioning of the system, chances are it won’t achieve its intended impact.

For example, Tiberius, Operation Warp Speed’s vaccine allocation planning system, is capable of using census data to allocate vaccines where they are most needed. On the surface, it was an opportunity to use this technology to enhance the equity of the national vaccine campaign, but there were two key problems. One is that if tools like VAMS underserve the highest-need demographics, allocating them more supply limited impact. The second is that such a system requires accurate and current data on who has already been vaccinated, which it is supposed to receive from VAMS, to make those decisions.

Policies on data reporting vary from state to state—even site to site. Overworked clinic staff find reporting procedures so onerous that instead of using the systems, they frequently scribble records on paper and enter them later, when they find the time. This means delays in identifying patterns in data – including patterns like persistent inequities in who is getting vaccinated.

The inadequacy here isn’t necessarily in the design of Tiberius, but in that the underlying human problem precluding system optimization—the need to standardize and simplify the completion and input of records in VAMS—isn’t addressed by either technology. Without solving that problem, Tiberius’s loftier technological capabilities to more equitably allocate supply are neutered.

Like the user-experience flaws in VAMS, the inability of the technology to solve the medical records bottleneck disproportionately impacts the poor, as their local healthcare centers are likely to be the most overburdened and under-resourced

Public health tools for public health goals
By the time new public health technologies reach the population, inadequacies like poor user-experience, incompatibility with other technologies, or lack of interoperable systems are perceived as technical flaws. More often, however, the roots of these flaws are found in the approach to their design. When developing tools to tackle a public health threat, product developers don’t have the luxury of not accounting for the needs of the most vulnerable and marginalized; in fact, those people are often the product’s core market. This often means making sacrifices in aesthetics or supplemental functionality to ensure the smoothest user journey possible.

This bottom-up approach that prioritizes patient experience is not status quo to health technology developers and requires a shift in perspective. However, when it comes to public health, it is truly the only way. After all, vaccine coverage and equity are practical necessities as much as moral ones, as the threat of Covid-19 can’t be overcome without widespread vaccination for all.

Research into the best way to monitor the heart rates of unborn babies is urgently needed, says an NHS report that records babies born with avoidable brain injuries in England. It says all affected families should be offered an apology and an open conversation about their care. The NHS Resolution report looked at 96 serious […]

FORT LAUDERDALE, Fla. (AP) — Florida is suing the nation’s two largest drugstore chains, Walgreens and CVS, alleging they added to the state and national opioid crisis by overselling painkillers and not taking precautions to stop illegal sales. Attorney General Pam Bondi announced late Friday that she has added the companies to a state-court lawsuit […]

Media playback is unsupported on your device A man who noticed a lump “the size of a frozen pea” has urged men to check for breast cancer symptoms. Vince Kitching, 69, booked an appointment with his GP straight after noticing it in his left breast. An ultrasound scan showed he had a tumour and he […]