Every parent wants to raise a child who respects his or her own body and the personal space of others. One mom’s Instagram post last week went viral exactly for addressing a unique method to teach these values from the youngest age.

Nisha Moodley, a women’s leadership coach and inspirational speaker, shared a photo of herself lying in bed with her 6-month-old son Raven on Instagram, writing that she asks him for his permission before picking him up.

“Since the moment he was born, we’ve always asked before we pick him up,” she captioned in a now-viral Instagram post. “Why? Because we want him to know that his body is his, and that others’ bodies are theirs, and no one gets to make choices about someone else’s body.”

Moodley later explained to Yahoo Beauty why she asks for consent. “I don’t ever want my son to be a sexual perpetrator or the victim of one, and the best thing I can do is honor his choices about his own body. I also want him to pay attention to his instincts, and forcing physical touch could interfere with that,” she said.

How does she know her baby wants to be picked up? She explained it this way to the Yahoo reporter: “There have been times where Raven has responded by reaching his arms out for a hug or turning his head or body away. If Raven seems like he doesn’t want to be touched, I just explain to the person, ‘Give him a few minutes — he may just want Mommy now.'”

While Moodley has not explicitly said so, some media articles have linked her hands-off parenting choice with the RIE (Resources for Infant Educarers) parenting movement.

Moodley has not respond to WhatToExpect.com’s repeated requests for comment and disabled the comments on her Instagram post this weekend. She included an addendum explaining why. “Hundreds of people just came here to call me nasty names & wish terrible things upon myself & my child. I’m not interested in engaging with that kind of immature, thoughtless vitriol, even if just to delete,” she wrote. 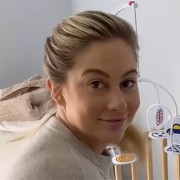 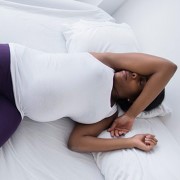 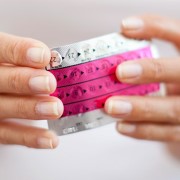 Moodley further explained that it’s not that she never touches her baby without his explicit consent and would never leave him in harm’s way. Her choice is a personal one, she explained — one which she believes offers her son a sense of control over his own body.

“I believe that when children feel that they have *some appropriate* choice, it leads to a greater sense of healthy autonomy. I want him to make healthy choices with his body & respects others’ as well,” wrote Moodley. “So long as we’re not harming or neglecting our children, to each their own. I’m not a perfect parent. I’m simply working at being as loving & conscientious as I can be, every day.”

So what is RIE Parenting?

Created in the 1940s by Magda Gerber, who taught parenting seminars from her home in Los Angeles, the RIE theory has been growing in popularity in recent years, possibly as a reaction to so-called “helicopter parenting,” or overpraising and overindulging kids. It’s reportedly followed by celebrities including Tobey Maguire, Penélope Cruz, Helen Hunt and Felicity Huffman.

According to the official RIE website, the RIE theory means “treating even the youngest infant as a unique human being, not as an object.” Parents who follow RIE parenting trust their infants and observe them carefully to intuit their communications and needs. Babies are allowed plenty of uninterrupted play time to explore their natural surroundings and learn new skills on their own. That means instead of jumping to the rescue, RIE parent “educarers,” as they’re known, offer only enough help to allow babies to “master their own actions.” Parents let babies struggle a bit, to help them to understand action and consequence.

With daily activities, parents also “encourage even the tiniest infant to become an active participant rather than a passive recipient.” That means parents inform their babies, for example, that they’re about to change their diapers or pick them up before doing so.

Is RIE parenting safe, and does it really work?

Lisa Asta, M.D., a pediatrician in Walnut Creek, CA, says that in the first 12 months of life, infants go though many stages — which makes it difficult to make a blanket statement about if and how this parenting theory can be applied. However, there are some tenets about infant development that don’t change, and kids thrive with touch and limit-setting and clear boundaries.

Unlike horses or cows, which walk from the day they’re born, human babies aren’t toddling around on their two feet exploring the world on their own until many months later. Until then, infants are relatively helpless. They experience the world through their parents — which means they rely on you for survival and nurturing. “We teach that by speaking and make eye contact to show we’re there for them and present and love them,” explains Asta.

In the first three months of life, newborn babies are adjusting to the daily rhythms of life outside of the womb, including day and night. That means unlike adults — who get completely thrown by jet lag, for example — newborn babies have a fairly irregular schedule and their bodies haven’t established habits for basic functions like eating and sleeping. “Parents might cycle through many things a baby needs and not find exactly what it is due to their lack of a clear circadian rhythm,” she says. “Newborns need to know in first three months of life that someone will be there, so if they have a need and they cry you will attend to them or that someone is there, because they are rather helpless.”

After about 4 months of age, most babies have settled into a more regular rhythm. At this point, babies are only beginning to understand receptive language — and they do so at different rates. But it’s now that doctors generally begin recommending parents explain to babies the actions they’re taking. “We as pediatricians tell a baby, ‘We’re going to have food now,’ to help a baby know what’s going to happen next,” she says. “Parents should always speak with their kids. Babies thrive on predictability.”

As babies get older, the permission theory gets a bit more complicated. At around 9 months of age, many babies begin to have separation anxiety, where they fear new people, including family and friends. At that point, Asta says, you may want to keep your baby in your lap when friends and family come over and encourage other visitors to talk to you before immediately picking up your baby.

And toward the end of the first year, toddler negativity or independence kicks in — and asking for permission from kids can get complicated. “You’re not going to ask an 11-month-old, ‘do you want a diaper change now?,’ because the child may want to play and not realize it’s time for change. If you ask a 12-month-old, ‘Do you want me to put you in your crib?,’ it would make life challenging,” says Asta. “With toddlers, it’s about setting limits with health and safety. That’s not to say that you shouldn’t set physical boundaries for your child — that’s good. The spirit of what she’s promoting is quite good. There are just developmental stages where it might cause problems.”

Asta says she recommends not asking yes or no questions of a toddler in order to create what she calls a win-win situation. Instead, she recommends what she calls the “medical ‘we'” for babies. So while you should definitely tell your child what you’re doing, you’re not necessarily asking for permission: “We’re going to put you in your car seat and go for ride,” or “We’re going to brush your teeth,” for example.

That said, there are benefits to teaching kids about boundaries and respect for their bodies. “Everyone wants to have boundaries,” says Asta. When they’re well established, kids may be better at sharing and keeping their hands to themselves at, say, the phase when their peers are biting and kicking.

If you’d like to try out RIE parenting, talk to your pediatrician and read up on baby and toddler development (Asta says the What to Expect the First Year book is a great resource) to understand what stage your child is in now and how various parenting strategies might work in practice. Asta adds that talking to a child behaviorist in addition to your pediatrician may help.

It’s also important to pay attention to your own child’s needs and avoid getting stuck on a theory that might not work well in practice for you. “There are many ways to successfully parent kids, and kids have different temperaments. One strategy is not always going to work well for every child,” Asta says.

No matter how you choose to parent, there are certain common-sense situations when your child definitely shouldn’t be calling the shots. “We don’t want to be invading a child’s space. But you’re also not going to ask an 18-month-old, ‘Can I hold your hand in a parking lot?’ In any situations that involve your child’s health or safety, you’re not going to ask permission since kids can’t think through the consequences,” says Asta.

Ultimately, while there are many theories about how to raise your kids, one thing we do know for sure is that what babies really need is your love and attention. Pediatricians, in fact, are most concerned with distracted parents who get so sucked into their cell phones that they’re not actually paying attention to their little ones. “I don’t personally know the science or know that there’s enough research to support these strategies. But as pediatrician, I can speak to what we do know: hold your baby, sing to them, love them,” says Asta.

Why You Should Learn How to Release Your Belly during Pregnancy

Everyone wants to keep their core strong during pregnancy, but do you wanna know a secret? *Come a little closer…* >>It’s just as important to learn how to release and relax through your belly and pelvis during pregnancy.<< *Does that come as a shock to you? It’s something all pregnant women need to know!* Here are three reasons why you…

The post Why You Should Learn How to Release Your Belly during Pregnancy appeared first on Knocked-Up Fitness®.

If you have a baby or other young children at home, you may be concerned about the latest rapid surge in COVID-19 cases, driven largely by the newly discovered Omicron variant. While the Centers for Disease Control and Prevention (CDC) only announced the first U.S. case of the Omicron variant on December 1, it has now […]

This article is provided courtesy of Kaiser Health News. For people who’ve been without health insurance during the pandemic, relief is in sight. In January, President Joe Biden signed an executive order to open up the federal health insurance marketplace for three months as of Monday so uninsured people can buy a plan and those […]